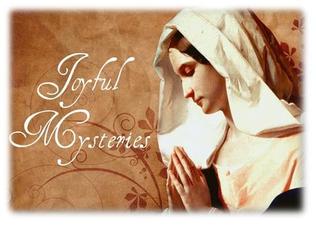 The Annunciation of the Lord 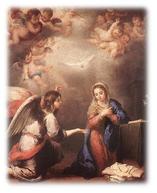 Fruit of the Mystery: Humility
Luke 1:26-38:
Now in the sixth month the angel Gabriel was sent from God to a city in Galilee called Nazareth, to a virgin engaged to a man whose name was Joseph, of the descendants of David; and the virgin’s name was Mary. And coming in, he said to her, “Greetings, favored one! The Lord is with you.” But she was very perplexed at this statement, and kept pondering what kind of salutation this was. The angel said to her, “Do not be afraid, Mary; for you have found favor with God. And behold, you will conceive in your womb and bear a son, and you shall name Him Jesus. He will be great and will be called the Son of the Most High; and the Lord God will give Him the throne of His father David; and He will reign over the house of Jacob forever, and His kingdom will have no end.” Mary said to the angel, “How can this be, since I am a virgin?” The angel answered and said to her, “The Holy Spirit will come upon you, and the power of the Most High will overshadow you; and for that reason the holy Child shall be called the Son of God. And behold, even your relative Elizabeth has also conceived a son in her old age; and she who was called barren is now in her sixth month. For nothing will be impossible with God.” And Mary said, “Behold, the handmaid of the Lord; may it be done to me according to your word.” And the angel departed from her.

Fruit of the Mystery: Love of Neighbor
Luke 1:39-45:
Now at this time Mary arose and went in a hurry to the hill country, to a city of Judah and entered the house of Zacharias and greeted Elizabeth. When Elizabeth heard Mary’s greeting, the baby leaped in her womb; and Elizabeth was filled with the Holy Spirit. And she cried out with a loud voice and said, “Blessed are you among women, and blessed is the fruit of your womb! And how has it happened to me, that the mother of my Lord would come to me? For behold, when the sound of your greeting reached my ears, the baby leaped in my womb for joy. And blessed is she who believed that there would be a fulfillment of what had been spoken to her by the Lord.” 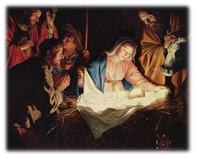 Fruit of the Mystery: Poverty
Luke 2:4-7
Joseph also went up from Galilee, from the city of Nazareth, to Judea, to the city of David which is called Bethlehem, because he was of the house and family of David, in order to register along with Mary, who was engaged to him, and was with child. While they were there, the days were completed for her to give birth. And she gave birth to her firstborn son; and she wrapped Him in cloths, and laid Him in a manger, because there was no room for them in the inn. 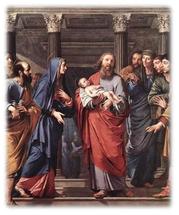 Fruit of the Mystery: Obedience
Luke 2:22-24
And when the days for their purification according to the law of Moses were completed, they brought Him up to Jerusalem to present Him to the Lord (as it is written in the Law of the Lord, “Every first born male that opens the womb shall be called holy to the Lord and to offer a sacrifice according to what was said in the Law of the Lord, “A pair of turtledoves or two young pigeons.”

The Finding of the Child Jesus at the Temple 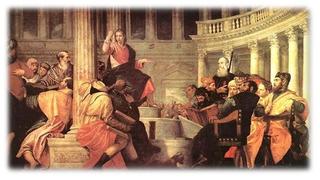 Fruit of the Mystery: Joy in Finding Jesus
Luke 2:40-52
The Child continued to grow and become strong, increasing in wisdom; and the grace of God was upon Him. Now His parents went to Jerusalem every year at the Feast of the Passover. And when He became twelve, they went up there according to the custom of the Feast; and as they were returning, after spending the full number of days, the boy Jesus stayed behind in Jerusalem. But His parents were unaware of it, but supposed Him to be in the caravan, and went a day’s journey; and they began looking for Him among their relatives and acquaintances. When they did not find Him, they returned to Jerusalem looking for Him. Then, after three days they found Him in the temple, sitting in the midst of the teachers, both listening to them and asking them questions. And all who heard Him were amazed at His understanding and His answers. When they saw Him, they were astonished; and His mother said to Him, “Son, why have You treated us this way? Behold, Your father and I have been anxiously looking for You.” And He said to them, “Why is it that you were looking for Me? Did you not know that I had to be in My Father’s house?” But they did not understand the statement which He had made to them. And He went down with them and came to Nazareth, and He continued in subjection to them; and His mother treasured all these things in her heart. And Jesus kept increasing in wisdom and stature, and in favor with God and men.