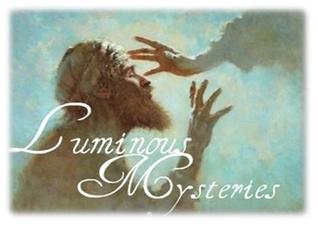 The Baptism of Jesus

Fruit of the Mystery: Openness to the Holy Spirit
Matthew 3:13-17
Then Jesus arrived from Galilee at the Jordan coming to John, to be baptized by him. But John tried to prevent Him, saying, “I have need to be baptized by You, and do You come to me?” But Jesus answering said to him, “Permit it at this time; for in this way it is fitting for us to fulfill all righteousness.” Then he permitted Him. After being baptized, Jesus came up immediately from the water; and behold, the heavens were opened, and he saw the Spirit of God descending as a dove and lighting on Him, and behold, a voice out of the heavens said, “This is My beloved Son, in whom I am well-pleased.”

The Wedding Feast at Cana 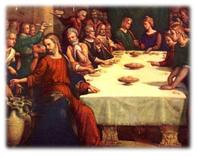 Fruit of the Mystery: To Jesus through Mary
John 2:1-10
On the third day there was a wedding in Cana of Galilee, and the mother of Jesus was there; and both Jesus and His disciples were invited to the wedding. When the wine ran out, the mother of Jesus said to Him, “They have no wine.” And Jesus said to her, “Woman, what does that have to do with us? My hour has not yet come.” His mother said to the servants, “Whatever He says to you, do it.” Now there were six stone water jars set there for the Jewish custom of purification, containing twenty or thirty gallons each. Jesus said to them, “Fill the water jars with water.” So they filled them up to the brim. And He said to them, “Draw some out now and take it to the headwaiter.” So they took it to him. When the headwaiter tasted the water which had become wine, and did not know where it came from, the headwaiter called the bridegroom, and said to him, “Every man serves the good wine first, and when the people have drunk freely, then he serves the poorer wine; but you have kept the good wine until now.”

The Proclamation of the Kingdom of God

Fruit of the Mystery: Repentance and Trust in God
Mark 1:14-15
After John had been arrested, Jesus came to Galilee proclaiming the gospel of God and saying, “The time is fulfilled, and the kingdom of God is at hand; repent and believe in the gospel.” 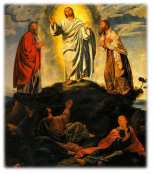 Fruit of the Mystery: Desire for Holiness
Luke 9:28-36
Some eight days after these sayings, He took along Peter and John and James, and went up on the mountain to pray. And while He was praying, the appearance of His face became different, and His clothing became white and gleaming. And behold, two men were talking with Him; and they were Moses and Elijah, who, appearing in glory, were speaking of His departure which He was about to accomplish at Jerusalem. Now Peter and his companions had been overcome with sleep; but when they were fully awake, they saw His glory and the two men standing with Him. And as these were leaving Him, Peter said to Jesus, “Master, it is good for us to be here; let us make three tabernacles: one for You, and one for Moses, and one for Elijah”—not realizing what he was saying. While he was saying this, a cloud formed and began to overshadow them; and they were afraid as they entered the cloud. Then a voice came out of the cloud, saying, “This is My Son, My Chosen One; listen to Him!” And when the voice had spoken, Jesus was found alone. And they kept silent, and reported to no one in those days any of the things which they had seen.

The Institution of the Eucharist

Fruit of the Mystery: Adoration
Matthew 26:26-28
While they were eating, Jesus took some bread, and after a blessing, He broke it and gave it to the disciples, and said, “Take, eat; this is My body.” And when He had taken a cup and given thanks, He gave it to them, saying, “Drink from it, all of you; for this is My blood of the covenant, which is poured out for many for forgiveness of sins.