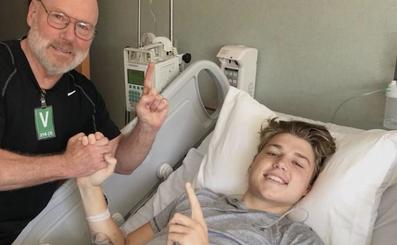 WACO, Texas, August 7, 2018 (LifeSiteNews) — Imagine telling a sick teenager that his cancer is giving his mom a late-term abortion.
Online trolls didn’t just imagine this: several of them wrote it on Jeremiah Thomas’ social media -- and elsewhere -- after the story of Jeremiah and the Make a Wish Foundation broke. As his “legacy wish,” Jeremiah asked to speak with the governor of Texas about ending abortion. The hate-filled messages in response have to be seento be believed.
But according to his mother, Kendra Thomas, Jeremiah has forgiven them.
“I pity them,” he told her. “To have that much darkness in your heart that you’d want a kid with cancer to die. Makes me wonder what happened to them in their life. It’s a scary place to be -- mentally and spiritually. I pray God would have mercy on them.”
Jeremiah, 16, was diagnosed with bone cancer in March 2018, less than a year after receiving baptism and becoming a teen preacher, witnessing to Christ outside of abortion clinics. When Jeremiah, a star athlete, heard that he had a cancerous tumor on his chest, he thought that his dreams to play college football and to become a minister were over. However, Jeremiah decided that he would continue to preach as long as he could, from his wheelchair.
His most recent video is an example.
“I don’t know how much time I have left on this earth,” Jeremiah said in his open letter, “but with the time that I do have, I want it to count for my God and for my generation.”
“This is my call to my generation: leave it all behind and come back home.”
Jeremiah told young viewers that they had grown up in a culture of death.
“This culture of death I speak of consists of abortion, homosexuality, and suicide. One-third of our generation has been wiped out due to abortion. Over 25 million people have died as a result of AIDS. Even without AIDS, the life expectancy of a homosexual man or women is about 33 years shorter than that of a heterosexual. More young people die from suicide than from cancer, heart disease, AIDS, birth defects, stroke, pneumonia, influenza, and chronic lung disease combined.”
“We have been handed a bill of goods that has completely destroyed us. In our nation, we have chosen death and received the curse.”
He compared teens today with the prodigal son, far from the Father, but like the loving father in the story, God is waiting for them.
“If you suffer from depression,” Jeremiah said, “there is hope in Jesus Christ. … If you’re contemplating suicide or abortion, there’s abundant life to be found in Christ.”
He said abortion was an abomination, turning “mothers into murderers and men into cowards.”
“It is our generation’s duty to rise up and abolish abortion,” Jeremiah declared.
He had a few choice words for left-wing college campus demonstrators “who think they’re fighting the establishment.”
“You ARE the establishment,” he said. “Your professors are liberal. Your parents are probably liberal. Your friends are liberal. The music you listen to is liberal. Hollywood is liberal, so the movies you watch are liberal. So tell me, who or what are you truly rebelling against?”
He said that if students really wanted to be rebels, they should fight for freedom. He held up pro-lifers as “true examples of counter-culture” in their effort to eradicate abortion.
Jeremiah has an upbeat attitude toward those who mock him. “Feels good to be hated for Christ,” he said. “Feels like I’m actually doing something.”
Jeremiah’s father, Rusty Thomas, is the director of pro-life group Operation Save America (formerly known as Operation Rescue).