Ministry at St. Robert Bellarmine Catholic Newman Center began in the late 1950’s. At the time, Illinois State University was called Illinois State Normal University, and drew future educators from across the state and Midwest. Responding to a growing Catholic community, a Newman Club was founded to support and nourish the faith lives of university Catholics. The original Newman Club met in a small house and its active members attended Mass at Holy Trinity Parish since they did not have their own chapel. However, in 1967 this changed with the building and dedication of a new Center. This Center, which looked much like an industrial warehouse building, was only meant to be temporary. However, time passed and the new “temporary” building served students for over 40 years; it continues to do so today as the current back half of our new Newman Center.

In 2004, with the great foresight of Bishop Daniel Jenky and the generosity of many, the diocesan capital campaign in the diocese, “Rooted in Faith,” began. Making Newman Centers one of the top priorities, three million dollars from this fund were allotted to build the new St. Robert Bellarmine Chapel and Newman Center to serve the students of Illinois State University, Illinois Wesleyan University, and Heartland Community College. Ground breaking for the new Center began in 2008. The outdoor cross on the outside of the new Chapel was raised on April 2, 2009 - the fifth anniversary of Blessed Pope John Paul II's going home to the Father. The first Mass was finally celebrated on August 22nd, 2010, the day dedicated to celebrating the Queenship of Mary. Then on November 7th, 2010 Bishop Daniel Jenky dedicated the new St. Robert Bellarmine Chapel.

Over the last 50 years, this Center has helped the germination of countless souls being lead to know, love, and serve the Lord more fully; there have been nearly two dozen priestly and religious vocations, the beginnings of many holy Catholic families, and immeasurable graces have been poured into the Church to help her on Her quest to reach a "new springtime." Through the intercession of St. John Paul II, St. Robert Bellarmine, and Blessed John Henry Cardinal Newman, may miracles of grace, holiness, and conversion be brought about in many more hearts. 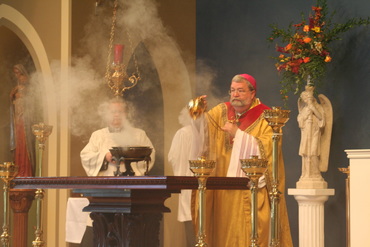 To see photos of the dedication mass and renaming, please click here.