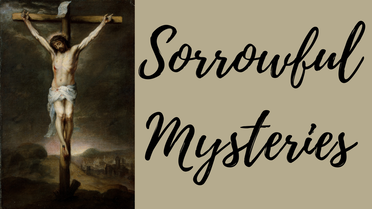 The Agony in the Garden

Fruit of the Mystery: Sorrow for Sin
Mark 14:32-42
They came to a place named Gethsemane; and He said to His disciples, “Sit here until I have prayed.” And He took with Him Peter and James and John, and began to be very distressed and troubled. And He said to them, “My soul is deeply grieved to the point of death; remain here and keep watch.” And He went a little beyond them, and fell to the ground and began to pray that if it were possible, the hour might pass Him by. And He was saying, “Abba! Father! All things are possible for You; remove this cup from Me; yet not what I will, but what You will.” And He came and found them sleeping, and said to Peter, “Simon, are you asleep? Could you not keep watch for one hour? Keep watching and praying that you may not come into temptation; the spirit is willing, but the flesh is weak.” Again He went away and prayed, saying the same words. And again He came and found them sleeping, for their eyes were very heavy; and they did not know what to answer Him. And He came the third time, and said to them, “Are you still sleeping and resting? It is enough; the hour has come; behold, the Son of Man is being betrayed into the hands of sinners. Get up, let us be going; behold, the one who betrays Me is at hand!”

Fruit of the Mystery: Purity
Matthew 27:26
Then he released Barabbas for them; but after having Jesus scourged, he handed Him over to be crucified.

The Crowning with Thorns 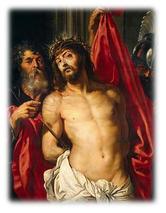 Fruit of the Mystery: Courage
John 19:1-6
Pilate then took Jesus and scourged Him. And the soldiers twisted together a crown of thorns and put it on His head, and put a purple robe on Him; and they began to come up to Him and say, “Hail, King of the Jews!” and to give Him slaps in the face. Pilate came out again and said to them, “Behold, I am bringing Him out to you so that you may know that I find no guilt in Him.” Jesus then came out, wearing the crown of thorns and the purple robe. Pilate said to them, “Behold, the Man!” So when the chief priests and the officers saw Him, they cried out saying, “Crucify, crucify!” Pilate said to them, “Take Him yourselves and crucify Him, for I find no guilt in Him.”

The Carrying of the Cross 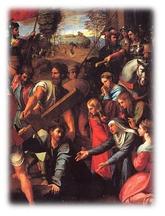 Fruit of the Mystery: Patience
Luke 23:26-27
When they led Him away, they seized a man, Simon of Cyrene, coming in from the country, and placed on him the cross to carry behind Jesus. And following Him was a large crowd of the people, and of women who were mourning and lamenting Him.

The Crucifixion and death of Jesus

Fruit of the Mystery: Perseverance
John 19:25-37
Standing by the cross of Jesus were his mother….When Jesus saw his mother and the disciple there whom he loved, he said to his mother, "Woman, behold, your son." Then he said to the disciple, "Behold, your mother." And from that hour the disciple took her into his home….Jesus said, "I thirst." So they put a sponge soaked in wine on a sprig of hyssop and put it up to his mouth. When Jesus had taken the wine, he said, "It is finished." And bowing his head, he handed over the spirit.….When they came to Jesus and saw that he was already dead, they did not break his legs,  but one soldier thrust his lance into his side, and immediately blood and water flowed out….For this happened so that the scripture passage might be fulfilled…."They will look upon him whom they have pierced."